Now Jesus stood before the governor. “Are You the King of the Jews?” the governor asked Him.

Jesus answered, “You have said it.” And while He was being accused by the chief priests and elders, He didn’t answer.

Then Pilate said to Him, “Don’t You hear how much they are testifying against You?” But He didn’t answer him on even one charge, so that the governor was greatly amazed.

At the festival the governor’s custom was to release to the crowd a prisoner they wanted. At that time they had a notorious prisoner called Barabbas. So when they had gathered together, Pilate said to them, “Who is it you want me to release for you—Barabbas, or Jesus who is called Messiah?” For he knew they had handed Him over because of envy.

While he was sitting on the judge’s bench, his wife sent word to him, “Have nothing to do with that righteous man, for today I’ve suffered terribly in a dream because of Him!”

The chief priests and the elders, however, persuaded the crowds to ask for Barabbas and to execute Jesus. The governor asked them, “Which of the two do you want me to release for you?”

Pilate asked them, “What should I do then with Jesus, who is called Messiah?”

They all answered, “Crucify Him!”

Then he said, “Why? What has He done wrong?”

But they kept shouting, “Crucify Him!” all the more.

When Pilate saw that he was getting nowhere, but that a riot was starting instead, he took some water, washed his hands in front of the crowd, and said, “I am innocent of this man’s blood. See to it yourselves!”

All the people answered, “His blood be on us and on our children!” Then he released Barabbas to them. But after having Jesus flogged, he handed Him over to be crucified.

For many surrounding Jesus the day before and of His crucifixion, it was all about power. The religious leaders were jealous of Jesus’ authority and sway with the people, and feared losing their standing. Pilate needed to maintain order and power, and gave in to the crowds to pacify them and secure his reputation with Rome. The disciples argued about who would be the greatest in the kingdom during the Passover feast.

So many grappling for power. Only One Who was All-Powerful.

And, for Him, it was all about the cross.

Though the religious leaders thought they were in control when Jesus was arrested, brought before them and condemned, it was planned to lead to the cross. They then had to bring Jesus before Pilate to execute Him, all leading to the cross. Each step was fulfilling the Word of God, so the very Word of God would reach the cross and lay down His life to atone for all sin for all time.

There was no need to justify Himself, to defend His cause or argue for His innocence. The only approval Jesus needed was from His Father, and it was His Father’s will to take Him to the cross.

Tonight, we focused on the thought that everything comes back to the cross. It is the center point for our lives, because it is there we gain forgiveness, redemption and freedom to really live.

It is still all about the cross.

We set up two different types of cups into a cross pattern tonight and played a game where we tossed small balls (and Angry Birds) to see if we could get them in the cups. It’s a hard game! The kids loved it, and even helped set back up the cups when they fell. 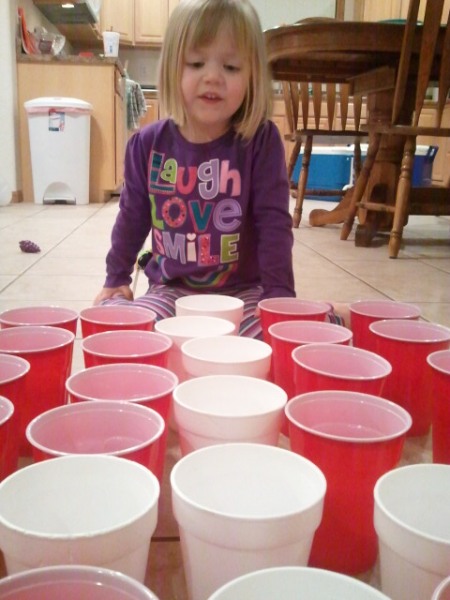 Lauren figured out the closer she was to the target, the more likely she was to find success.

4 thoughts on “Jesus goes on trial”