When some of those standing there heard this, they said, “He’s calling for Elijah!”

Immediately one of them ran and got a sponge, filled it with sour wine, fixed it on a reed, and offered Him a drink. But the rest said, “Let’s see if Elijah comes to save Him!”

Jesus shouted again with a loud voice and gave up His spirit. Suddenly, the curtain of the sanctuary was split in two from top to bottom; the earth quaked and the rocks were split. The tombs were also opened and many bodies of the saints who had fallen asleep were raised. And they came out of the tombs after His resurrection, entered the holy city, and appeared to many.

When the centurion and those with him, who were guarding Jesus, saw the earthquake and the things that had happened, they were terrified and said, “This man really was God’s Son!”

When it was evening, a rich man from Arimathea named Joseph came, who himself had also become a disciple of Jesus.He approached Pilate and asked for Jesus’ body. Then Pilate ordered that it be released. So Joseph took the body, wrapped it in clean, fine linen, and placed it in his new tomb, which he had cut into the rock. He left after rolling a great stone against the entrance of the tomb. Mary Magdalene and the other Mary were seated there, facing the tomb. 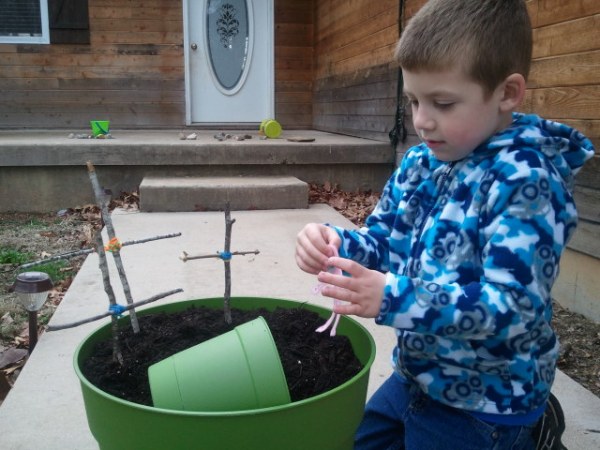 Jackson places Jesus in the tomb

Because of Jesus, I am accepted. My sins are as far as the east is from the west. It was Jesus who took my punishment. Only Jesus could reunite me with God, tearing the temple veil from top to bottom to prove it. His death caused earthquakes and rocks to split. His life transforms mine.

Even the people who crucified him, the brutal Roman soldiers, were terrified, not necessarily because of the stirring of the Earth, but the stirring of their hearts. They realized the man who hung on the cross dead in front of them was surely the Son of God.

Today we started making an Easter garden. The kids went on a hunt for rocks and sticks to plant. We filled a large flower pot with rick, dark soil, and made a hill like Golgotha, where we fashioned and set up three crosses. We also created a new tomb in the garden, tenderly placed Jesus’ body inside, and rolled a large stone across the entrance.

Oh the anticipation of Sunday morning!

One thought on “Jesus dies and is buried”