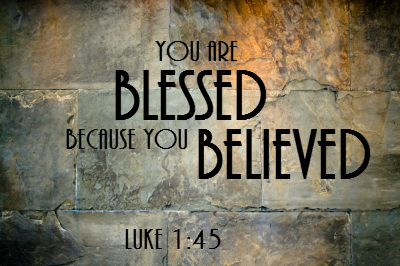 You are blessed because you believed

God’s promises can be overwhelming.

When God says He loves you, He is preparing a home for you in heaven, or that He will make all things work together for good for those who love Him and are called according to His purpose, it’s hard to understand the depth and power of that reality.

Sometimes, we need to see God’s promises up close. We don’t just need to hear, we need to experience. This is separate from belief. Mary believed the angel Gabriel at his word that she would carry the Son of the Most High, and that belief is confirmed in Scripture. Yet, she “hurried” to see her cousin Elizabeth a few days later, probably when she surfaced from the shock and gravity of what had just been proclaimed to her. She didn’t mosey along, she high-tailed it. She wanted to see the truth of what had been told to her.

Mary needed someone with whom to share God’s promise.

Elizabeth had her own God-promise that had grown for six months now, and was a visible reminder to all of God’s graciousness. When Mary greeted Elizabeth, God confirmed to both women His amazing plan for the children they both carried.

The Holy Spirit came upon Elizabeth, and she began to prophesy about Mary being the mother of the Lord. She encourages Mary by saying, “You are blessed, because you believed that the Lord would do what he said.”

The greatest blessings come through faith. Mary believed God at His word. She believed God, without knowing how or when or why. She just believed. And, Jesus came.

How many blessings have I missed, how many times have I not experienced the presence and power of Jesus, because I didn’t believe?

After Elizabeth’s proclamation, Mary heart can no longer be contained. Scripture doesn’t record that Mary has shared with anyone what had happened. With Elizabeth, Mary lets go of the questions and trepidation of what was to come, and praise bursts forth.

God’s promises should prompt our praise. Yes, they may overwhelm us, they may frighten us. We may not understand. But, with God’s promise comes His presence. Jesus is Emmanuel, God with us. He is all we need. He is our strength and our song.

“Oh, how my soul praises the Lord.
How my spirit rejoices in God my Savior!
For he took notice of his lowly servant girl,
and from now on all generations will call me blessed.
For the Mighty One is holy,
and he has done great things for me.
He shows mercy from generation to generation
to all who fear him.
His mighty arm has done tremendous things!
He has scattered the proud and haughty ones.
He has brought down princes from their thrones
and exalted the humble.
He has filled the hungry with good things
and sent the rich away with empty hands.
He has helped his servant Israel
and remembered to be merciful.
For he made this promise to our ancestors,
to Abraham and his children forever.”