What God says is what matters

When God calls you, rescues you from the pit of sin, He doesn’t leave you filthy and in chains. He doesn’t free you and then turn His back. You are wanted. You are loved. God tenderly takes you just as you are, and wipes away the dirt and the shame. You are priceless to Him. You are worth Him becoming your sin so you could become His righteousness. He paid your debt, in full. God clothes you in His finest robes and puts gold rings on your fingers. You are His treasure.

God redeems all your wrongs. He makes good from your failures and brings about His dreams for your life, according to His purposes. He isn’t embarrassed to be seen with You. What He says is what matters most. He chooses to no longer remember what you have confessed and humbly asked to be forgiven. He sets you on His path. He promises to never leave you, and He is true to His word.

So, don’t call what is clean to be unclean. You are restored. You are not who you were. You don’t have to live that way anymore. Your Father has given you a new life. Live in His calling. You are beautiful. You are filled with His Holy Spirit. You have purpose.

Christmas Countdown Day 12 focused on the census. As part of a worldwide Roman census, Joseph took Mary, now great with child, on a road trip to Bethlehem. They were two in the midst of thousands upon thousands traveling across the countryside to obey the law that they be counted. As they passed through the crowds, trying to get to Joseph’s hometown, they must have felt small, unimportant and alone. Like trying to find a marble in the midst of a jar of rice, they were sifted as they made their way to a town where, as it turns out, every door was closed to them except a dirty stable. Though they may have felt like just a number to the Roman empire, they were the two counted and chosen by God to be His One and Only Son’s earthly parents. We count, just as Mary and Joseph did, in God’s eyes. We are not a number in all of humanity, we are his precious children. Tonight we made census jars. We dyed rice green, let it dry, and filled baby food jars. Then we placed four marbles, representing our family, into the jar, sealed it, and shook it up. We imagined what it was like for Mary and Joseph to travel across the country to Bethlehem, feeling like two in the midst of so many. We thanked God for seeing them and taking care of them, and for loving us that way, too. Then, we found the marbles in our jars by shifting the rice around. 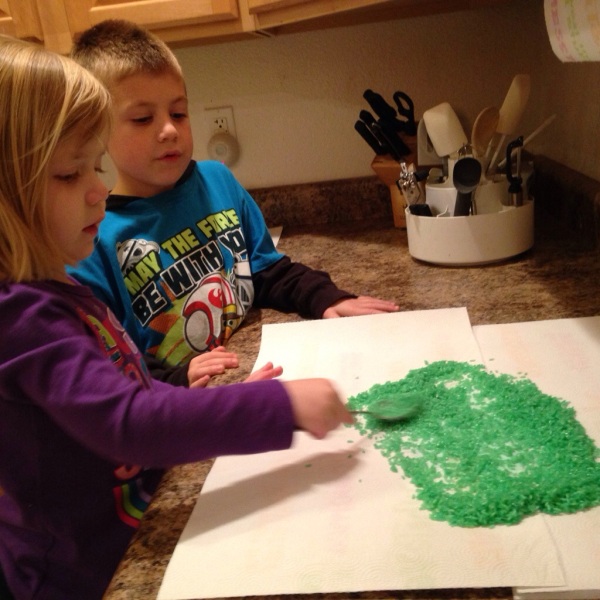 Lauren spreads our her green rice to dry while Jackson watches.