I am so thankful God was watching over Jackson this morning when I was not.

Jackson started shouting to me, “I burned the book! I burned the book!” as I was coming down the hallway after changing Lauren’s diaper. I put her down and raced toward him. He had a panicked look on his face and held out his book to me. I glanced over his shoulder and saw the candle I had lit earlier with smoke wafting from where the wicks were burning just seconds before. 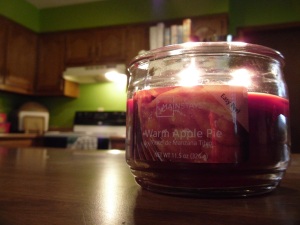 I turned over the book, and sure enough there was a dime-sized black mark on the back, warm to the touch. Even though I had put the candle in the middle of the kitchen counter, which is too far for Jackson to touch from either side, he decided he would reach up with his book and rest it over the candle jar. That snuffed out the wicks and burnt the book.

The implications of what he had done hurtled through my mind, and with a pounding heart I tried my best to explain to him how dangerous and wrong his actions were. Jackson knew he shouldn’t have done it, yet he just didn’t understand in that moment how serious the consequences could have been.

Sin is like that. It may look beautiful, like a flickering candle, and even fill a room with its sweet fragrance. Its presence can soothe, and even hypnotize. It’s hard to determine how close you can actually get to the flame until it is too late. Damage from the flame can heal, but the scar will always remain.

Are their areas of our lives that we are flirting with sin, or not taking precautions to distance ourselves from that sin? Are we doing something, or not doing something, that is making it easier for others around us to fall into temptation? Just because we are not currently involved in sinful activity doesn’t mean we are fully protecting ourselves and those around us.

I do think some of my warning to him did sink in, because the first thing Jackson did when we got to story time at the library was tell one of his friends the whole story. He also then explained that the fire could have made the house fall down and we all could have died, so don’t put books on fires.

That’s advice we can all use.

Jackson has recently been spending some quality time in “time out” each day. This morning, he found himself there once again. However, on this occasion, he was not alone.

Lauren decided to join him.

She wasn’t there to pester him (which has been known to happen) or there to try to play with him because she didn’t understand why he was there. She sat beside him, patiently and quietly waiting until his punishment had ended.

This is not a photo of the kids in time out, though I wanted to take one to show Lauren sitting with Jackson. It just didn't seem right to take a picture of Jackson getting in trouble. So, here's the duo playing happily together!

This sweet act by my precious girl made me think of and thank my Heavenly Father. Even though Jesus paid the penalty for all the sins that ever were, are and will be by sacrificing His life on the cross, so many still see God as only a sin-punisher, rather than a grace-giver. Even as Christians we sometimes place our sin above God, allowing our shame to trump His forgiveness. We are children that run away and hide when we’ve done something wrong, no different from the first man and woman who God created.

When our sin is exposed, and we come to God’s feet and ask for restoration, we still deserve discipline and punishment. There are always consequences to sin, whether you are living as a part of Christ’s family, or you have not yet embraced Him as your Savior.

Yet, as I watched Lauren sitting there, sharing in Jackson’s time out, I realized that when I am experiencing the results of my decisions, bearing the consequences of my sin and am under God’s discipline, I am not alone. Even though my suffering is a result of my sin against God Himself, God chooses to stay by my side through the punishment, sharing it with me. God promised me that He would never leave me. He will never turn His back on me. I am His, and He is mine. That means where I go, He goes too.

Even to the corner for “time out”.