In the days of King Herod of Judea, there was a priest of Abijah’s division named Zechariah. His wife was from the daughters of Aaron, and her name was Elizabeth. Both were righteous in God’s sight, living without blame according to all the commands and requirements of the Lord. But they had no children because Elizabeth could not conceive, and both of them were well along in years.

When his division was on duty and he was serving as priest before God, it happened that he was chosen by lot, according to the custom of the priesthood, to enter the sanctuary of the Lord and burn incense. At the hour of incense the whole assembly of the people was praying outside.

An angel of the Lord appeared to him, standing to the right of the altar of incense. When Zechariah saw him, he was startled and overcome with fear. But the angel said to him: “Do not be afraid, Zechariah, because your prayer has been heard. Your wife Elizabeth will bear you a son, and you will name him John. There will be joy and delight for you, and many will rejoice at his birth. For he will be great in the sight of the Lord and will never drink wine or beer. He will be filled with the Holy Spirit while still in his mother’s womb. He will turn many of the sons of Israel to the Lord their God. And he will go before Him in the spirit and power of Elijah, to turn the hearts of fathers to their children, and the disobedient to the understanding of the righteous, to make ready for the Lord a prepared people.

In the rush of the holiday season, schedules can get log-jammed, and yesterday, my plans for our Christmas Countdown fell through. Instead, I had an amazing opportunity to lead story time at our local library and share the true Christmas story with the children. And, Wednesday evening, I helped throw a Christmas party for our 7-9th grade students. In the midst of the planning and juggling, the kids and I didn’t get to our Advent tree. I tried to fabricate an activity toward bedtime, but both kids were exhausted from a very full day. We ended up in our pj’s, turned off all the lights, and cuddled on the couch before bedtime gazing at the colorful glow of the Christmas tree.

Day 12 and Day 13 fit together perfectly, so after dinner tonight, both Jackson and Lauren congregated at the Advent tree. They both were able to take off an ornament, instead of the usual jockeying for position to be the one.

Day 12’s challenge was to make a nativity scene out of playdough  That was fun! I ended up being the sculptor, and managed to piece together Mary, Joseph and Baby Jesus. Then Jackson imagined what they might have said to each other, and he was off in his imagination with the playdough characters. Lauren played with her felt Christmas tree from Day 11 until she realized that Jackson had something she didn’t. So, I made her a playdough nativity set.

Meet Mary, Joseph and Baby Jesus. Jackson insisted that Mary’s hands be folded because she is praying. And, I promise that is Joseph, not an elephant. The beard is slightly misleading.

We moved on to Day 13, which was what the kids were looking forward to the entire evening. The family activity was enjoying ice cream sundaes. Just mention ice cream in front of my daughter, and a gleeful hysteria ensues! We scooped up the vanilla and drizzled the cream with Hershey’s chocolate syrup, and I became the best mom ever! 🙂 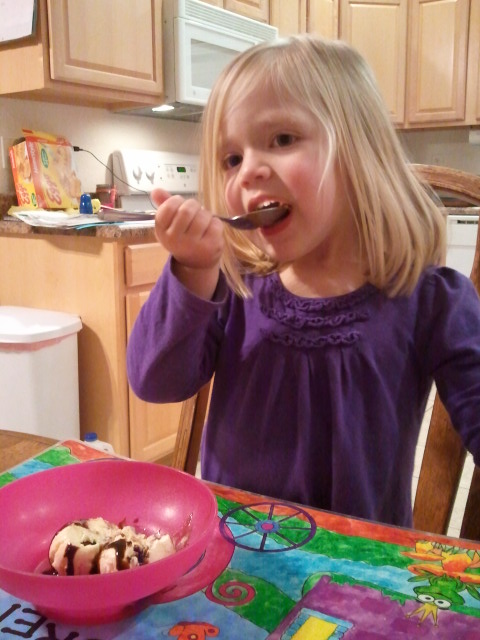 These last two days have reminded me that Christmas isn’t about activities and cute crafts and well-executed plans. It’s about Jesus being the priority in our real lives, in the middle of interruptions and over-scheduling. Jesus is Emmanuel, God with us. He goes where we go. Even in the midst of an extremely busy week, He is there, guiding us through it all, reminding us that He is in control. Jesus didn’t choose to be born into this world because “all is calm and all is bright.” He came because we needed Him, in the midst of our messy, unorganized lives, to bring us peace.

Christmastime is here! This year, be intentional to impress the Savior of the World on the hearts of your children. Explore ways to engage your family with the true meaning of Christmas through these activities, Bible studies and crafts!