Our letter of the day was “U”. We got out our crayons and stickers to decorate our pages, and I began to tell the story of the night before Jesus was crucified. “U” stands for Unleavened, with a focus on the unleavened bread served at the Passover dinner.

U stands for Unleavened

We talked about how Jesus broke bread and shared a cup of wine with his disciples, which symbolized Jesus’ broken body and the blood He would shed on the cross to pay the penalty for our sins.

Jackson and I have talked quite a bit in the last several months about what Jesus has done for us because He loves us so much. We have had the privilege to see many baptisms at our church in the past year, including several recently, and just finished Vacation Bible School. There is much he’s been pondering about Jesus.

Our conversation together went from one topic to another, and all of a sudden Jackson started crying. Though this wasn’t what we were talking about, he told me through his tears that he didn’t want to go to hell and that he wanted to ask Jesus into his heart so he would be with Jesus in heaven.

We talked several times through the ABCs. We need to A – Admit that we have sinned against God and ask His forgiveness. We must B – Believe that Jesus is the Son of God and that He died on the cross to take the punishment for our sins. Three days later He defeated death and rose again! Finally, we should C – commit our lives to Him. Ask Him to come into our hearts and let Him be in charge.

With him being so young, I didn’t want to progress past his understanding, and this is where the conversation has always stopped before.

This time was different. His heart was changing before me, and he told me he needed to pray right then.

And so, independently, full of faith, Jackson prayed for Jesus to forgive him and asked Him to save him and come into his heart.

Just moments before, Jackson’s eyes were full of tears. But, as he said Amen, he smiled wide. Then he began to laugh and jump up and down, so full of joy! 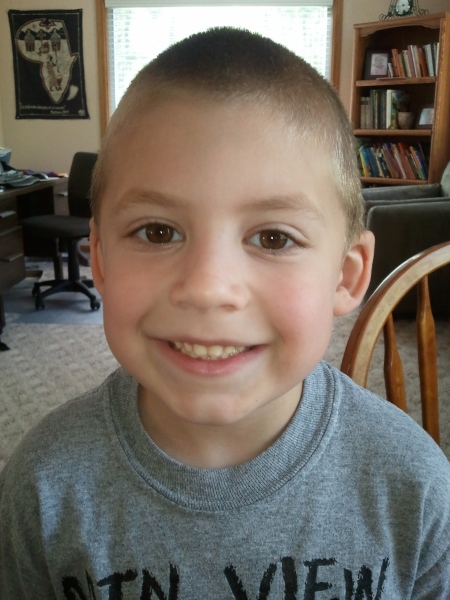 Jackson couldn’t stop smiling after asking Jesus to come into his heart!

Of course, the first thing he wanted to do was call Daddy. He has since asked me to call grandparents, aunts, uncles, and has left so many messages. He couldn’t wait to tell friends when we went to the water park that afternoon. His excitement was and is infectious!

What an amazing day we had! What plans God has for Jackson as he grows in his faith! Jackson will spend his lifetime now and forever with His Savior!

Has anything like this ever happened to you? Do you remember a time when you decided once and for all to follow Jesus, whether you were five years old or 50+? If you have, I hope this post reminds you of how Jesus has changed your life! You may, though, not be sure about where you stand with God. Jesus loves you so, so much. He gave up His life to make the way for you to be right with God and spend forever in heaven. You can have the same joy that Jackson has! (Learn more about beginning a personal relationship with Jesus.)

Christmastime is here! This year, be intentional to impress the Savior of the World on the hearts of your children. Explore ways to engage your family with the true meaning of Christmas through these activities, Bible studies and crafts!